The vaccine against the human papilloma virus (HPV) is free of charge in Armenia since late 2018 for all 13-year-old teenage girls. However, this healthcare measure did not have the desired effect due to the unexpected presence of antivaccine groups, who managed to misinform healthcare professionals and the community. Upon this alarming situation, FIDEC Armenia signed a collaboration agreement with the Ministry of Health of that country and with the National Immunization Program, in order to dispel unfounded fears and doubts, and, above all, win back the trust of the community.

“We planned and are executing a very intensive communication campaign in traditional and digital media, in close coordination with the Ministry of Health and the National Immunization Program,” stressed Narine Hayrapetyan, Executive Director of FIDEC Armenia. They designed and printed 2,000 posters, 96,000 flyers, and 100 roll-up banners with the main prevention messages, which were distributed among healthcare centers all over the country.

In addition, they issued press releases and published an  op-ed  and an article with frequently asked questions in Armenian. They also gather and spread bimonthly reports with news about HPV all over the world. As part of the digital strategy, they have shared infographics and videos with messages from prestigious doctors, and with myths and truths about the vaccine.

“On October 25, 2019, we launched an active campaign on Facebook,” Hayrapetyan added. They publish infographics and promote them to different demographics with a psychographic segmentation that takes into account psychological features that influence habits. “The content on HPV that we share through this social network is published simultaneously on the websites of the Ministry of Health and the National Center for Disease Control and Prevention (NCDC), as well as in public and closed groups,” added the executive director.

On Facebook alone, FIDEC Armenia reached 170,000 users, with over 20,000 positive interactions, likes, shares, and clicks. This reach increased several times over thanks to the strategic partners and to the users who engaged in this topic. “Another great news is that, at the campaign launch, 20% of the reactions were negative, through the anger emoji, but these reactions fell to 5% after two weeks, and now we only get likes and hearts,” Hayrapetyan highlighted.

This communication campaign is part of the HPV Prevention Program by FIDEC Armenia, which also includes educational activities aimed at healthcare professionals and the first epidemiological study in Armenian women to determine the prevalence of HPV infections (see box). This virus causes, among other types of cancer, cervical cancer, one of the most common types of cancer among women globally.

The World Health Organization (WHO) defined two essential preventive measures to control this infection and reduce its lethality. The first measure is periodic gynecological checkups and Papanicolaou tests or Pap smears, and the second measure is introducing the vaccine in national immunization programs for teenagers, as was done in Armenia. Close to three hundred million doses have been applied worldwide, and the vaccine has shown to be nearly 80% effective.

How Frequent are these Infections Among Women?

Concurrent with the actions taken to promote vaccination against HPV, FIDEC Armenia, through an agreement with WHO-IARC (International Agency for Research on Cancer) and the Bill & Melinda Gates Foundation, launched in 2019 the first epidemiological study in Armenian women to determine the prevalence of HPV infections and how they relate to cervical cancer.

In one of the main activities during the first few months, researchers and physicians from 10 health centers in the cities of Erevan, Abovyan, Armavir and Ijevan got 500 urine samples from adult women or girls under 17 years of age to assess the presence of HPV and thus establish the disease viral load. Participants got detailed information about the study beforehand, and they or their guardians then consented to the study requirements.

These samples were gathered at the NCDC and were then sent to the IARC in Lyon (France) for their analysis. At this agency, in October, 2019, FIDEC principal investigator and study coordinator participated in the analysis of the results and the planning of the next stage, during which 231 cervical cancer biopsies were carried out. These samples were sent to the National Oncology Institute of Armenia and are ready to be sent to Lyon as soon as international flights are resumed after their cancellation in 2020 due to the COVID-19 pandemic. 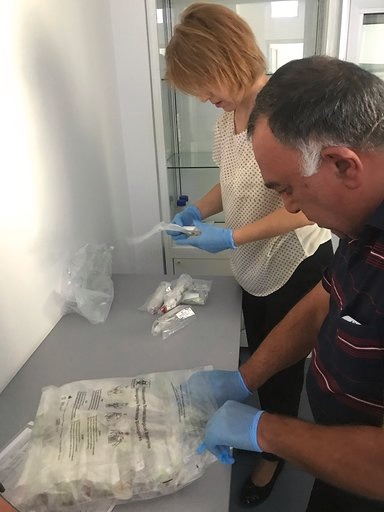 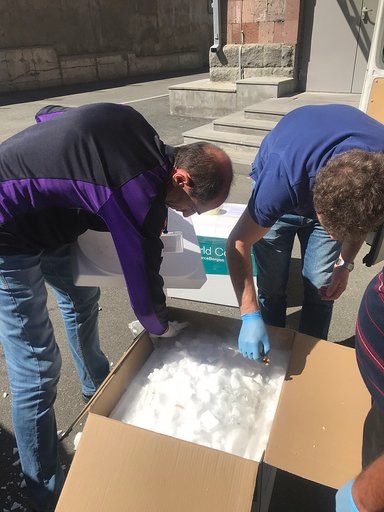 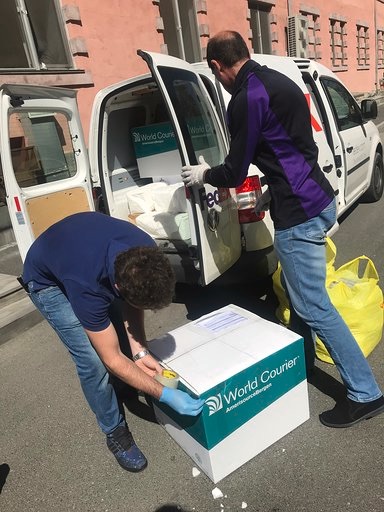 Urine Samples Being Prepared and Sent to France for Their Analysis.